Make Yourself at Home in Bergen County New Jersey 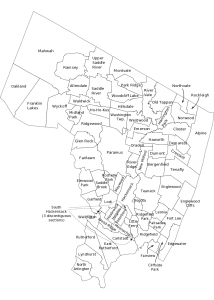 Bergen County’s population resides among 70 municipalities but no large cities. Its most populous town, with 43,010 residents, is Hackensack, also its county seat. In 2010, Mahwah covered the largest total area of any municipality, at 26.19 square miles. Bergen County is one of the wealthiest counties in the United States, with a median household income of $84,677 in 2014.

The county hosts an extensive park system totaling nearly 9,000 acres. The Bergen Performing Arts Center (PAC) is based in Englewood, while numerous museums are located throughout the county. In September 2014, the Englewood-based Northern New Jersey Community Foundation announced an initiative known as ArtsBergen, a centralizing body with the goal of connecting artists and arts organizations with one another in Bergen County.

Bergen County is also home to several colleges and universities:

We’d love to provide you with a Bergen County NJ Home Inspection. We also serve all of Northern NJ.